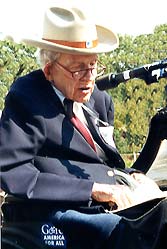 July 26, 2011 marks the 21st anniversary of the signing of the historic Americans with Disabilities Act. As always I reflect on the words of Justin Whitlock Dart Jr, a profound leader, during his lifetime, in the disability rights movement, and can almost hear his richly cadenced voice calling for justice in our society:

“I adamantly protest the richest culture in the history of the world, a culture which has the obvious potential to create a golden age of science and democracy dedicated to maximizing the quality of life of every person, but which still squanders the majority of its human and physical capital on modern versions of primitive symbols of power and prestige.

I call for solidarity among all who love justice, all who love life, to create a revolution that will empower every single human being to govern his or her life, to govern the society and to be fully productive of life quality for self and for all.

I do so love all the patriots of this and every nation who have fought and sacrificed to bring us to the threshold of this beautiful human dream. I do so love America the beautiful and our wild, creative, beautiful people. I do so love you, my beautiful colleagues in the disability and civil rights movement.”

In this forum I have questioned the advancement, or lack thereof, in our society in attitudes toward individuals with disabilities. I struggle with the dichotomy of seeing people with disabilities succeed in achieving their goals every single day and the continuing ignorance of some in our society. Sometimes the lesson comes right to my own doorstep. The night before last night my sister and my daughter, Megan, called to vent about an incident of blatant discrimination. Megan had recently traveled to Whidbey Island to look for a new puppy. After the visit the breeder called Megan to tell let her know she could not have the puppy because she was too disabled to have a dog! The woman went on to say that due to Megan’s condition she couldn’t take care of a dog adequately. After all the woman had once broken her leg and had a hard time taking care of her dogs. Not only did the woman say this to Megan but she also stated she had emailed other kennels breeding the same type of dog to warn them of Megan’s interest and notify them that they shouldn’t sell to her because of her disability.

I haven’t discussed my daughter or her disability in this forum. Suffice to say Megan is a wonderful person and a very accomplished individual. She received her high school diploma and AA degree at the same time. She was one of only 2 students to accomplish this feat attending River Ridge HS that year. She holds a Bachelor of Science Degree from the University of Washington, School of Medicine and has passed her licensing board examination. In high school she played on the River Ridge Tennis Team in doubles and played in the school marching band. I think she can manage being a dog owner! But all this woman could see was a young woman with a disability. Besides the fact that Megan is accomplished and she certainly can handle a dog, hasn’t this woman heard about service dogs? Apparently this breed isn’t cut out for the task.

In conversations with my friends with disabilities I know this happens all the time. I ask myself, will it ever change?

Then I think of Mr. Dart and his call for fighting injustice to ensure everyone has the right to govern their own life and participate in our society as equals. Mr. Dart gives us much to ponder.

This space is intended to share my thoughts and update the community on issues concerning Morningside and its clients as well sharing inspirational employment stories.

This site is for information and discussion purposes only and does not represent the official views of the Morningside. Any views expressed on this website are those of the individual post author only. Morningside accepts no liability for the content of this site.